Man films his own death under tsunami of flying bricks 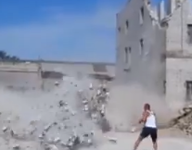 A young resident of Lipetsk was tragically killed while watching the work to demolish a building. Assuming that he is standing at a safe distance, the man took out his cell phone and started filming what was happening. It turned out that neither the man, nor the workers could correctly estimate the degree of the risk.

The tragedy occurred on June 16 in the yard of a hardware store of the city of Lipetsk. A bulldozer was demolishing a two-storyed brick building on the territory of the yard, reports most.tv. A 29-year-old store employee, Evgeny Titov, took a break from work to watch the process. He took out his cell phone and began to film. The workers, who were in charge of the process, were present on the scene. They were supposed to ensure security during the work.

The building was being demolished with the help of a bulldozer. Steel cables were attacked to the machine and to the wall of the building. While the multi-ton vehicle was trying to snatch a piece out of the brick wall, Evgeny Titov, anticipating the moment when he is going to share his video on the net, was  encouraging the workers: "Come on, come on! .."

The wall eventually tumbled down, and a huge chunk of it fell to the ground, breaking into countless pieces. The pile of bricks bounced off the asphalt at high speed and a wave of them flew at people. The man, who was standing in front of Evgeny, was also filming the process on his cell phone. At the last moment, the man managed to jump aside to safety. Evgeny was not so lucky: the tsunami of bricks came flying at him, knocking him down.

The phone kept filming even when its owner was lying unconscious on the ground and people were running around, screaming for help. Later it turned out that another man was also injured at the time of emergency. His injuries were not too severe, and doctors let the man go soon after he received necessary aid.

Evgeny Titov, the maker of the video, was killed. Surgeons fought for his life, but could not save the man. As his relatives later said, the bricks broke all his ribs, fractured the pelvis, damaged internal organs and smashed his skull.

Man films his own death under tsunami of flying bricks