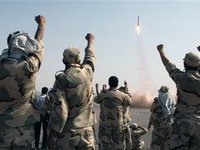 Israel's Intelligence Minister Yuval Steinitz said on Monday that Iran aims to reach a level of development of nuclear technology to be able to produce 30 atomic bombs a year, France 24 reports.

According to him, Iran is killing time, building more uranium enrichment plants before proceeding directly to the creation of weapons.

"The Iranians are getting closer to it. They have almost 200 kilograms of 20 percent enriched uranium," Israel's intelligence minister said.