Syria to defend itself with Russia's S-300 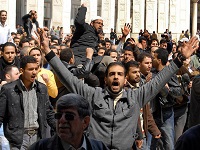 Syria will be able to defend itself with the help of Russian S-300 missile systems. President Bashar al-Assad stated that the first batch of the Russian complexes had already been delivered to the country.

He also stressed that the next batch of the systems was about to arrive in Syria. The Syrian leader also said that his country would not try to stop the groups that seek to liberate the Golan Heights, meaning the Lebanese group Hezbollah.

The U.S. government condemned Russia's efforts to help Syria with arms supplies, particularly S-300 systems. Russian Minister for Foreign Affairs, Sergey Lavrov, assured the international community that Moscow was conducting the deliveries under the terms of the old contract and has not concluded any new ones.

A few days ago, the European Union decided to temporarily lift the embargo on arms supplies to the Syrian opposition. It turns out that European diplomats believe that Moscow can not do what Washington and Brussels can.