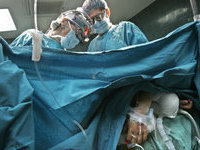 11-year-old Russian boy Nikita Onishchenko, who was wounded in a hotel on Crete, still remains in a serious condition. In this regard, the transportation of the child to Russia has been delayed. The boy is being treated at Aglayya Kyriakou Children's Hospital in Athens, Greece.

Nikita was stabbed nearly two dozen times while on holiday on the island of Crete, allegedly by a Dutchman working as an entertainer at the child's hotel, Greek officials said. Nikita, from Moscow, vanished from  five-star hotel in the Hersonissos region in northern Crete. His mother raised the alarm at 9pm on Tuesday.

Officers scoured the area for hours before finding the wounded boy at about 2 a.m., lying behind a parking lot near the hotel. The unnamed Dutchman, reportedly 20 years of age, worked as an entertainer at the hotel where the family was staying, The man was arrested and interrogated. He had confessed to the stabbing as well as to stealing an iPad and mobile phone from the boy.