A man, who hijacked a police car in Moscow today, April 23rd, arranged a massive car accident in the city. The accident occurred early in the morning of Tuesday, April 23. The perpetrator hijacked a vehicle of the traffic police and tried to escape on it, traveling in the direction of the Garden Ring Road. 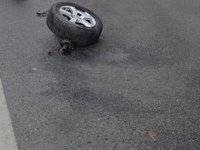 The police started chasing the hijacker. The latter, trying to escape, slammed the car into several other vehicles at the entrance to the Mayakovsky Tunnel. A Nissan, a Mercedes and a Honda were among the vehicles that were damaged in the accident. According to police, no one was injured in the accident; the attacker was arrested.

The car accident provoked a grand traffic jam in the area of the Triumph Square. The traffic on the inner side of the tunnel was blocked, two of the three lanes were closed for traffic. The maximum speed on other roads nearby does not exceed 10 kilometers per hour.