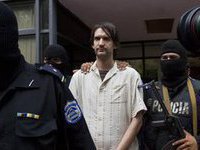 The Nicaraguan police have detained one of ten most dangerous criminals in the United States - pedophile Eric Justin Toth, who in April 2012 replaced FBI's most wanted criminal Osama bin Laden, according to the Associated Press.

A former school teacher from Washington is accused of producing and distributing child pornography. He was detained at the border with Nicaragua.

Toth lost his job in 2008 after his fellow teacher found prohibited pictures with him. Since then, and until recently the government was unable to arrest him. The same year, Toth's car and a suicide note were found in Minneapolis. In the note, he wrote that he had allegedly intended to commit suicide by drowning in a lake. The body has never been found, for obvious reasons.

The FBI decided to include Toth on the list of most dangerous criminals, because the bureau had absolutely no information about his whereabouts.

Thus, the list of the FBI, which was created in 1949 and officially confirmed in 1950, two places remain "vacant." On March 14, 2013, Edwin Ernesto Rivera Gracias, was included on the list. The man brutally murdered a 69-year-old man in Colorado, but on March 27th, he surrendered to authorities.

The list also includes Semyon Mogilevich - a businessman holding three citizenships, wanted in 4 countriesю He is considered to be one of the leaders of the Russian mafia.