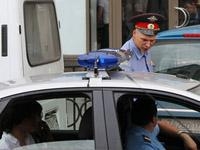 Russian law enforcement authorities promise the award of 3,000,000 rubles ($100,000) for information about the killer, who on Monday shot six people in the city of Belgorod, officials said.

"According to the joint decision of the Ministry of Internal Affairs of Russia in the Belgorod region and the regional government, the amount of cash remuneration for meaningful information, which will allow to locate and detain the suspect in the murder of six people in Belgorod, which occurred on April 22 at about 2 p.m. in the center of Belgorod, will make at least 3 million rubles," officials said.

The criminal opened fire at people in one of the central streets of Belgorod on April 22nd. Six people were killed.

Earlier, the city government announced April 23 and 24 days of mourning for those killed in the tragic events that took place in the city the day before. All entertainment and cultural events were canceled in the city.