All of America is holding its breath watching the investigation of the terrorist attack in Boston on April 15, which killed three and injured more than 180 people. According to recent reports, brothers Tamerlane and Dzhokhar Tsarnaev, natives of the countries of the CIS, are the prime suspects. According to Western publication, Dzhokhar Tsarnaev was born in Kyrgyzstan, and Tamerlane - in Russia. The two boys used to live with their families in Dagestan. The Tsarnaevs moved to America in 2002-2003. 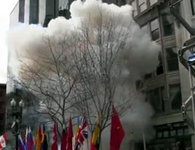 Another version of investigation says that Tsarnaev brothers moved to the U.S. from Kazakhstan, where they had previously fled from Chechnya. Supposedly, the suspects entered the United States holding the Turkish citizenship. In any case, most Western journalists call the terrorists "Russian", without going into details.

Well-known political analyst Sergei Mikheyev said in a comment with Pravda.Ru how the tragedy may affect the already difficult relations between Russia and the United States.

"Secondly, the question is whether it can complicate the Russian-American relations. Perhaps, the attack could create a small problem that, but in fact, I believe that this is an argument in favor of the Russian position. Russia has long warned the Americans that flirting with various separatist and terrorist organizations of the North Caucasus would not lead to anything good. I'd like to remind here that the famous website "Kavkaz-Center" has a huge number of servers in the United States. At one time they were based in Europe, but then relocated to America. The Americans turn a blind eye on that and pretend that the situation is quite normal.

"Above all, we must recognize that people from the North Caucasus have become participants of events in hot spots around the globe. They work in Afghanistan, Tajikistan Syria, and other hot spots. This is a consequence of the instability that existed in Russia in the 90s, and the two Chechen campaigns. It is an open secret that separatists enjoyed the support from external forces for quite a long period of time, including the Americans and their allies from other countries. That is, if they had not done that during the 1990s, the situation would have been much calmer."