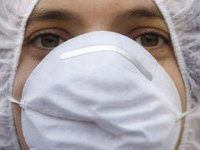 Twenty-six people suffered as a result of an emergency situation that occurred at the plant producing liquid chlorine in Berezniki, the Perm region.

A malfunction in the process for the production of liquid chlorine at Soda-Chlorate there was a short-term release of the caustic substances.

Rescuers and medics arrived at the place of the disaster.  According to preliminary data, 26 employees of the plant were injured. Four of them were hospitalized. According to the regional Emergencies Ministry, the release of chlorine has been blocked. At the moment there is no threat to the population.