The Russian Academy of Sciences, which investigates  the unexpected "meteor attack" in the Urals, has shared preliminary results with the general public. 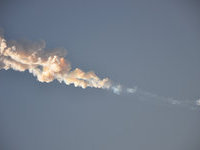 "According to our estimates, the body was a few meters large, it weighed about ten tons, and its power was a few kilotons. The celestial body entered the atmosphere at the speed of 15-20 kilometers per second, collapsed at an altitude of 30-50 kilometers, and the movement of fragments at high speed caused powerful glow and a strong shock wave. The bulk of the material of the falling body evaporated, the remaining pieces slowed down and could fall to the ground as meteorites," ITAR-TASS quoted the press service of the RAS.

The flight of the meteorite in the sky over the Chelyabinsk region was accompanied with three explosions of varying power, the chairman of the regional branch of the Russian Geographical Society, Sergey Zakharov said. "From what I saw, the balls of fire were flying from the south-east to north-west. There were three explosions that were preceded with a bright flash of light, with a temperature of approximately 2,500 degrees Centigrade. The first explosion was the strongest," the scientist said.

In the video below you can see clips of the fall, explosions and destruction (the video of the crater at 3:00 is fake - it is actually the footage of a gas crater in Turkmenistan).

According to most recent information from the Interior Ministry, as many as 1,200 people suffered from the meteor attack. The local authorities have evaluated the damage at one billion rubles.

A report from the Russian Geographical Society said it was a bolide explosion, rather than a meteor shower. "A bolide is a large celestial body, actually a large meteor, that exploded when entering the lower, denser layers of the atmosphere, and showered the ground with debris, - said Zakharov. - A meteor shower is practically safe - it is a flow of crushed rocks falling from space. Repeat: we had a fireball, or a bolide explosion."

"A Bright white flash of light was so intense that it fully illuminated the huge yard of the apartment building where I live, - the scientist shared his personal impressions. - Its brightness was increasing incrementally - the flash lasted for about five seconds in total. Everything was happening in absolute silence. The sound that is, the shock wave, came six minutes later. Immediately after the explosion dogs started whining, flocks of pigeons flew up into the sky, car alarms went on. Nobody could understand what had happened ....."

Meanwhile, Interior Ministry officials said that two fragments of the meteorite were found in the Chebarkul district of the Chelyabinsk region. Another one was found in Zlatoust.

Official representative of the Central Military District, Yaroslav Roshchupkin, said that the military had found the location of the meteorite fall. The diameter of the crater is six meters.

EMERCOM officials are careful in their comments about the recovered fragments of the space body. "The fragments range from 5 mm to 1 cm. We do not have any precise information yet," officials told Interfax.

The Russian president is concerned about the situation with the fall of the meteorite, ITAR-TASS said. He held a meeting with the head of the Russian Emergencies Ministry, in which Minister Vladimir Puchkov requested Moscow specialists should be sent to the Chelyabinsk region.

The fall of the meteorite in the Chelyabinsk region affected, according to latest reports, up to 600 local residents. Dozens were hospitalized. "As many as 571 people have asked for help, 34 were hospitalized," officials said. Two victims remain in a serious condition. Meanwhile, according to the governor of the Chelyabinsk region, 725 people sought medical treatment, including 159 children.

Many people are still shocked about what happened. An employee of one of the branches of The Post of Russia was hospitalized with a heart attack. The blast frightened many children, who were at school at the time of the incident.

More than 100,000 square meters of windows have been smashed in the Chelyabinsk region as a result of the explosion. A total of almost 3,000 apartment buildings have been damaged. To repair the shattered windows, the local authorities want to resort to the help of a local glass factory. However, the number of workers at the plant is not enough to help people quickly, so the authorities seek the assistance of volunteers.

As of 8:00 p.m. local time, February 16, the number of victims increased to 985 people. Forty-three people were hospitalized. Two remain in a critical  condition. No casualties have been reported.