Russia's Investigative Committee has completed the investigation of the criminal case into the sinking of the Bulgaria boat in the Kuibyshev water reservoir. 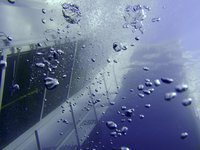 The criminal case counted over 90 volumes. There are more than 200 victims on the case, more than a thousand witnesses were questioned. The investigation was carried out more than 250 different examinations.

The most complex expertise was navigation, engineering and technical forensic examination, which was conducted from August 2011 to March 2012. The expertise determined the circle of suspects that included the mate of the vessel Ramil Khametov, Bulgaria subtenant Svetlana Inyakina, expert at the Russian River Register Yakov Ivashov, and two officers of Rostransnadzor Vladislav Semenov and Irek Timergazeev.

According to investigation, the ship sank as a result of negligent actions of officials of supervising bodies and institutions taken during the preparation of the ship for the voyage, as well as during its operation.

The tragedy occurred on July 10, 2011, when the double-decked ship Bulgaria sank in a few minutes in the Kuibyshev reservoir. A hundred and twenty-two people were killed, 79 passengers were rescued.