Russia evacuates its citizens from Syria

Russia sends two aircraft to evacuate its citizens and refugees from Syria. As expected, Emergencies Ministry aircraft IL-76 and Yak-42 will evacuate those who wish to leave Syria on January 22nd. The people will be evacuated from the Lebanese capital of Beirut. 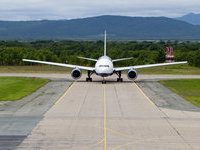 The aircraft will take about 100 people, while the number of refugees is estimated at about 150 people.

The plan to evacuate Russians from Syria was elaborated in December. By then estimates, there were about 5,300 Russian people staying in Russia, plus those people, who were not registered in consular offices - women who married Syrian men and their children.

Meanwhile, it was reported that the ruling regime in Syria works on the creation of additional military forces, consisting of men and women who can participate in the guerrilla war. Such groups that received military training in Iran, a key ally of Syria, already appeared in the province of Homs.

Civil war has been going on in Syria since March 2012. According to the UN, more than 60,000 people have been killed in the country killed since the beginning of the conflict. Explosions occur almost every day.