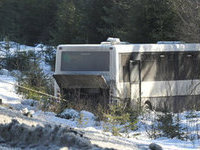 An accident took place to a passenger bus with pilgrims on Samara-Ulyanovsk highway today. As a result, one person was killed, ten were injured.

A 40-year-old man, who was driving a MAZ truck, lost control of the vehicle and collided with a passenger bus. There were nearly 50 people on board the bus.

The bus was carrying pilgrims from the village of Bulgary in Ulyanovsk. A truck driver was killed in the accident; several pilgrims received injuries. The circumstances of the accident are being investigated.

Another large-scale accident with pilgrims occurred in the Chernigov region of Ukraine in July of last year. A bus was traveling from Velikiye Luki to Kiev. As a result of the accident, 14 Russian pilgrims were killed, 29 were injured.