War in Africa to last for decades 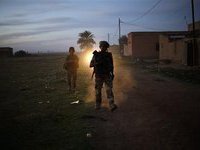 British Prime Minister believes that the war in North Africa will last for decades. The politician made the comment after dozens of people were killed in a recent operation to free hostages in Algeria, including British citizens, The Financial Timesreports.

According to the Prime Minister, the threat from the activities of terrorist Islamist militants in the Sahel region of Africa has been getting more serious. It will take "years, even decades, not months" to combat the threat.

Cameron compared the situation in North Africa with what is happening in Afghanistan. "We're dealing with extremists, Islamists from al-Qaeda - the same what we encountered in Afghanistan and Pakistan."

British authorities said that their activities in Algeria and Mali, where the British army supports the French in counter-insurgency operations, will in the first place be associated with the strengthening of local government and attempts to establish a dialogue.

On January 16th, militants penetrated into Algeria from Libya and attacked employees of an oil and gas complex, owned by Algerian company Sonatrach, Britain's British Petroleum and Norway's Statoil. The attackers took about 700 people hostage. There were about 130 foreigners among the hostages. Well-known smuggler and kidnapper Mokhtar Belmokhtar was in charge of the terrorist operation.

The terrorists demanded the Algerian government should release their associates, cease hostilities in Mali and revoke the permission, which France received to use the airspace of the country.

On January 18th, dozens of hostages were able to escape. The following day, the gas field was stormed; all 32 fighters were destroyed. The exact number of hostages has not been established yet - most likely, it goes about more than 40 victims. Ten Japanese and five Norwegians victims were named among them.