Man loses 700,000 euros trying to exchange them for rubles in Moscow

A man fell a victim of fraudsters as he tried to exchange a large amount of foreign currency at a Moscow currency exchange office at a favorable rate. 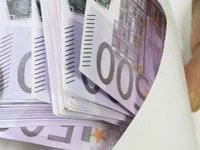 Interfax reported with reference to the press service of the Moscow Directorate of the Interior Ministry that the man debited 700,000 euros from his account in one of the commercial banks. On the Internet, he found the most favorable exchange rate, and on Monday arrived in the currency exchange office located in the 2nd Novopodmoskovny Side Street, near Voikovskaya metro station.

The man gave the money to the cashier, she asked him to wait until the money was going to be checked for authenticity.

"After a while, the man became suspicious and called the police. The woman never returned," officials said. Police officers found that the office was empty, the woman disappeared with the money.

According to the euro rate in Russia on Monday, the man lost more than 28 million rubles. The name of the victim has not been revealed.

According to Interfax, this could be the biggest robbery committed on this scheme in Russia in recent years. On June 5, 2012 in Moscow, currency exchange fraudsters stole 250 thousand dollars from a manager of one of Moscow restaurants.

In December of 2012, in Moscow's Prospekt Mira, 35, the director of a commercial company lost 600,000 euros, which he brought to the currency office to exchange them for rubles. Half an hour later the entrepreneur decided to find out what was happening to his money, but did not find the cashier inside.  He called police, who found out that the woman escaped through the emergency door.