The number of victims of the stampede, which took place New Year's Eve in the Angolan capital, has risen to 16 people. More than 100 people were seriously injured. 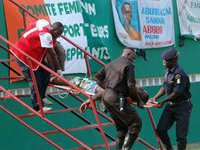 The death toll of the stampede, in which victims were trampled or died of suffocation in the capital of Angola has risen to 16 people, three of them are children.

The Angolan authorities confirmed the information. Earlier, news agencies said that there were ten people killed in the stampede, which took place at the main stadium of Luanda.

The tragedy occurred when thousands of people tried to break into the mass night service at the stadium in Luanda, the Angolan capital. The Citadel Deshportiva Stadium can house about 70 thousand people. The number of those willing to participate in the service was a lot larger.

According to local authorities, there were at least four children among the victims.

As reported by Reuters, Deshportiva Citadel stadium was supposed to hold the church service of the World Church of the Kingdom of God, which is a branch of the Pentecostals. According to preliminary data, uncoordinated actions of security guards became the causes of the tragedy. The employees of the stadium opened only two gates of the four, which led to the stampede.

A similar large-scale tragedy occurred on New Year's Eve in another African country - Cote d'Ivoire. On the night of January 1, local residents gathered to see the fireworks on the stadium of the country's largest city, Abidjan. On account of the resulting stampede, about 60 people were killed, most of them were children.