Syrian opposition turns its back on Moscow

Syrian opposition leaders have refused to come to Moscow for talks and demanded an apology from Russia for supporting the regime of Bashar al-Assad. 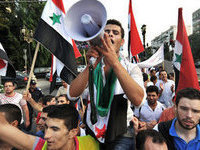 According to Al Jazeera, the chairman of the coalition of Syrian opposition forces Muaz Ahmed al-Khatib, said that opposition was open for negotiations, but would not come to Moscow. According to him, Russia must first denounce the "crimes committed by the Syrian regime." In addition the representative of Syrian rebels demanded Russia should "condemn the crimes of the Syrian regime."

Meanwhile, representatives of the Assad regime have already arrived in Moscow for negotiations. The delegation is headed by Foreign Minister of Syria, Faisal Miklad. The UN and Arab League representative on Syria, Lakhdar Brahimi, is to arrive in Moscow on December 29th.