A Volga vehicle with the body of Irbek Dudarov, Deputy Mufti of North Ossetia, was found on the outskirts of Vladikavkaz. According to law enforcement, the cleric died as a result of five gunshot wounds. 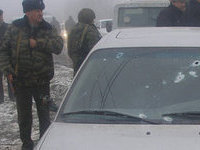 Unidentified individuals stopped the Volga vehicle, in which Dudarov was traveling, last night, on the road on the outskirts of Vladikavkaz. The men forced the official out of the car and opened fire from automatic weapons at him.

The Mufti of North Ossetia, Khadzhimurat Gatsalov, believes that the offense could be committed by "enemies of Islam."

On July 19th, Deputy Mufti of Tatarstan, Waliullah Yakupov, was shot and killed in Kazan at the entrance to his apartment. The same day, the Mufti of Tatarstan, Ildus Faizov, was injured after his car was blown up. Both religious leaders in the country are known as fighters against extremism.