Senior officials killed in An-72 air crash in Kazakhstan

As a result of the crash of the AN-72 plane not far from the town of Shymkent, South Kazakhstan, all 27 people aboard were killed. The departmental plane was carrying interim head of the Border Service of Kazakhstan, Turganbek Stambekov, a group of officers of the central office of the service and seven crew members, the press service of the Committee for National Security of Kazakhstan said. 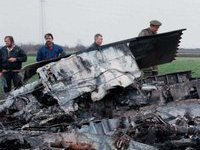 Meanwhile, the media published eyewitnesses' stories of the crash and the first version of what happened. The An-72 was flying from Astana to Shymkent, where Colonel Stambekov was on a business with a team of assistants. There was only 20 kilometers left before the point of destination. The aircraft started to descend while flying over one of the villages, and then lurched and fell.

Safety experts said that the An-72 aircraft was one of the most reliable airplanes. A technical malfunction that could cause the crash is nearly impossible. The only thing that could cause the crash, experts say, was the icing. The crashed airliner could be permitted to fly with an ice crust on the body, suggested the source. This version coincides with the official version: a criminal case was filed into the crash under Article 392 of the Criminal Code of Kazakhstan (violation of flight safety rules).

Others believe that the tragedy could be plotted, the newspaper wrote. According to them, it is highly unlikely that the plane with a high-ranking official on board was not inspected properly before takeoff.  It was very easy to organize the air crash by placing a bomb underneath one of the seats.

"I just wanted to step into the house, when I saw the plane flying very low. It was flying above our village, and in about 4 seconds there was an explosion. I was there about 15 minutes ago. There are forage caps and human remains everywhere, a local resident, Baurzhan Dosov, told reporters.

The military transport aircraft An-72 was produced in December 1990. In 2012, it underwent repairs at Antonov's repairing plant in Ukraine.