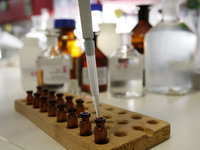 About 650 students were evacuated from Moscow school No. 1338 after chemicals were spilled at a chemistry class. Two children suffered due to the rough handling of the phenol indicator.

According to the press service of the Department of Internal Affairs for the Northern District of the capital, at around 10.50 a.m. at school number 1338, located at Klinskaya Street, one of the bulbs burst during a chemistry class, while students were conducting a laboratory experiment.

Due to the pungent odor that filled the whole building, 650 students were evacuated to the nearby school, No. 2020. Two students were injured as a result of the accident; they received medical assistance.

Specialists of the Russian EMERCOM conduct the decontamination of the classroom.