A Russian tourist died at a ski resort in Austria as a result of an avalanche. 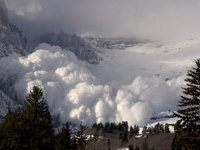 According to the Austrian Times, the tragedy occurred in Shoengraben. A 48-year-old Russian went backcountry skiing with a group of tourists on the part of the slope, which was outside the zone of security services provided at the resort.

According to the publication, the weather for skiing was not the best, due to very low visibility. Coming down from the mountain, the man entered into the avalanche and was instantly covered with two meters of snow. The victim's friends noticed that their partner was gone, although it did not happen immediately. They waited for him at the foot of the mountain, but the man did not show up.

The tourists called a rescue team. Rescuers found traces of an avalanche. The man was uncovered, but it was too late. The tourist was dead.

On December 4th, 2012, a 26-year-old Russian businessman drowned in Vietnam. He was vacationing with his friends on the beach. The young man went to swim, and his friends saw him drowning in a while. Rescuers brought the man to the shore, but they failed to bring him back to life.