Boy dies on board Boeing 777 in Russia

The police continue the investigation into the causes that led to the death of a boy on board the plane flying from Moscow to Khabarovsk. The pilots landed the plane in Krasnoyarsk due to the child's illness. 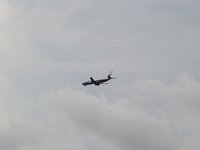 The investigation will take from ten to thirty days. According to preliminary information, the preschooler had a serious disease of the brain.

The boy was flying with his parents, adds RBC. "The family was returning from abroad, where the child either underwent or tried to undergo a course of treatment. All the data on the child's disease have been provided to forensic experts who will establish the cause of his death," representative of the West Siberian Investigation Department of Transport, Anton Chernyshov said.

A Boeing 777 flying from Moscow to Khabarovsk made an emergency landing at the airport of Krasnoyarsk on December 13 due to the death of a five-year-old boy.

The child's condition worsened considerably, and the pilots decided to land in Krasnoyarsk. However, according to the press service of the West Siberian Investigation Department for Transport, despite the measures taken, paramedics pronounced the boy dead. According to some reports, the boy was suffering from cancer.