The amount of snow that Ukraine's Kiev has seen during the recent couple of days corresponds to what the city normally sees during two winter months. 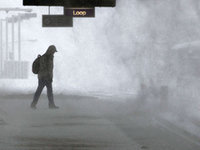 The head of the Kiev City State Administration Alexander Popov urged all residents to come out into the streets to remove the snow. Drivers are recommended not to use their cars.

The head of the city administration addressed the citizens and guests of the Ukrainian capital. The document published on the website of the Kiev administration says that heavy snowfalls have triggered a state of emergency in the city, MediaPort reports. This will give an opportunity to have public utilities, departments of EMERCOM and the Ministry of Defense, as well as builders and employees of various companies involved in the work to remove snow from the streets.

The city is literally paralyzed. There are meter-high snowdrifts in the streets, trees break under the weight of snow. Seventeen trees have broken in the city as a result of heavy snowfalls. One of the trees fell on a man, he was hospitalized.

An urgent address has been sent to the Ministry of Education and Science, Youth and Sports of Ukraine, to education institutions of the Ministry of Defense, to the  Security Service to attracting students to snow-removing activities.