U.S. drones have killed 178 children in Pakistan and Yemen, according to War Costs. The organization received the information from reliable sources, including direct participants of the air raids, reports huffingtonpost. 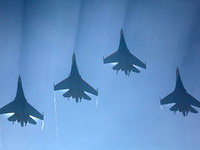 War Costs representatives communicated with the children who survived the air attacks. The discussions have resulted in "Drones Exposed" documentary. "The U.S. drone war in Yemen and Pakistan will long remain in the memory of local people, especially those who have lost 178 children on the battlefield," says Robert Greenwald, a director and a member of Brave New Foundation.

War Costs posted a short video online that showed some of the killed children, indicating their name, age and place of death. In addition, it refers to the policy of secrecy chosen by the U.S. government, when the data on casualties among the civilian population do not correspond to reality.

President Obama's chief adviser on terrorism, John Brennan, made a statement in 2011 saying that the losses among civilians was an incredibly rare phenomenon.

War Costs has released a detailed report on the situation in which they encouraged to review the legislation to make the use of drones more open to the public.