The Moscow police investigate the triple murder, which was committed in Eastern Birulyovo on the southern outskirts of Moscow in the evening of November 19th.  The crime was committed in less than two weeks after the massacre in the office of a pharmaceutical company. Igor Televinov, 40, who could possibly be a mentally unbalanced religious fanatic, first killed his nine-year-old son, Alexander, and then six-year old daughter, Anna. Afterwards, the man killed his mother when she came back home from a walk. The man stabbed the three victims to death. Apparently, the victims could not show any resistance, Life News said. 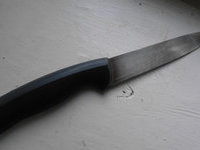 After the murder, the man took the time to write a note, in which he asked to sell the apartment and bury the children with this money, the Komsomolskaya Pravda newspaper wrote.

The man wanted to kill himself in the end, but he also had to kill his wife first. When she came home from work, he met her on the doorstep and said that he had already sent his mother and children to heaven. The man offered his wife to follow them: he slashed the woman's throat and face with the same knife.

The wounded woman somehow managed to escape from the apartment. All covered in blood, she rushed into her neighbor's, shouting: "Lock the door!" The women called the police and an ambulance. The wounded woman was taken to hospital, her life is out of danger.

Having entered the apartment, where the tragedy occurred, law-enforcement officers, doctors and investigators saw the following picture. The bodies of the two children and their grandmother were lying in pools of blood. All the victims had their throats slit, their hands were folded crosswise on their chests, the little girl and the murderer's mother had icons and burning candles put in between their fingers. The dead boy had an icing lamp in his hands, Vesti reports.

The man was arrested; he tried to show resistance to police, apparently staying in an inadequate condition. A criminal case was filed into the "murder of two or more persons" and "attempted murder."

The man was unemployed. He was sick, he began to gain weight and would rarely go out. His wife worked in a barbershop. The woman was spending much of her salary on medications for her husband.