18:39
Ukrainian commander: "It's a matter of time when Russian flag will be raised in Kyiv
17:57
German PzH 2000 howitzers captured by Russian military in Ukraine
17:46
Russian ice hockey player accused of dodging army service as he wants to sign up NHL
17:13
Czech general tells bad news to Zelensky
17:03
Protests in Uzbekistan: Authorities backpedal as 18 people killed
16:38
Zelensky's adviser says the surrender of Lysichansk is Ukraine's successful operation
16:05
Anonymous insider explains why Russia tolerates shelling of its cities by Ukraine
15:59
Mysl Polska: Ukrainian refugees see Poland as a cash cow
15:52
Kyiv responds to the neutralization of 40 Nazis with a staged video

Man sentenced to 14 months in jail for killing Siberian tiger

The poacher from Russia's Far East was sentenced to one year and two months of hard labor for the murder of an Amur tiger. In addition to criminal penalties, the man will have to pay the fine of 575,000 rubles ($19,000). 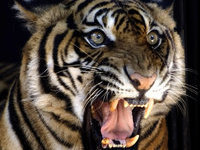 The sentence was brought down on Alexander Belayev today in the courtroom of the Khasansky district court of the Primorye region. Additionally, the convict  was deprived of his hunting weapon, from which he killed the Red Book animal. To crown it all, the man will never be allowed to hunt again, IA Data.Ru said.

Belyaev originally claimed that it was the tiger that attacked him on Nov. 15, 2010. To defend himself, Belyaev said, he was forced to use a rifle. Nevertheless, according to WWF (Russia), the professional knowledge of the staff of the Department of Hunting Control and the World Wildlife Fund (WWF), who quickly reached the scene of the accident, helped to find the body of the tiger in the forest, but to clarify the true picture of the tragedy.

In November of 2010, a resident of the city of Ussuriysk, Sergey Burtsev, was fined 150,000 rubles ($5,000) for killing a female tiger in the summer of the same year. The hunter was arrested when he tried to sell the tiger derivatives.

Noteworthy, the price of a killed tiger on the black market reaches $50,000. There are only 450 tigers living in Russia's Amur region. The rare predator is listed in the Red Book of the Russian Federation and the Red Book of the International Union for Conservation of Nature.