In Chukotka, a polar bear attacked employees of Valkarkay polar station. According to New Politics portal, the bear came right up to the house, where the meteorologists lived, killed a leashed dog and tried to break into the house. The bear broke one of the doors, but the second one stopped the beast. 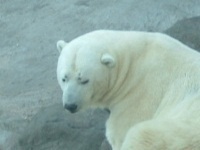 To escape from the predator, the explorers climbed onto the roof and called for help.  The nearest settlement - Pevek - was 70 kilometers away.

Armed policemen arrived on an offroad vehicle. One of them fired his rifle three times in an attempt to scare the bear away. The beast stubbornly refused to leave, and the policeman had to kill the animal.

Several days ago, in Kamchatka, policemen were forced to shoot a brown bear that had broken into a house. The animal was attracted by the smell of food that someone was cooking. The predator broke the window frame and got inside the house, forcing the people to hide in the bathroom.

A week ago, a bear attacked the camp of geologists in the Krasnoyarsk region of Russia, killing one.