In the center of Moscow, a vehicle of the wedding procession blocked the road, and the passengers, apparently being gripped with emotions, began to shoot guns into the air. The police had to stop the "wedding fun" and detain the offenders. 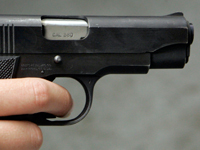 The incident occurred at the intersection of Tverskaya and Mokhovaya Street this afternoon. The wedding procession of eight cars was traveling on Leningrad Prospect towards Tverskaya Street, Vedomosti said. The participants of the procession started shooting into the air from traumatic firearms. According to NTV, the people were driving Ferrari and Lexus vehicles.

Traffic police officers arrived at the scene soon. However, the wedding guests did not listen to the lawful requirements from police officers. Additional police crews arrived soon afterwards for investigation.

"The vehicles were blocked, we interrogate every individual, who used guns," - law-enforcement officials said.

The shooters were natives of the North Caucasus.

The man, who was celebrating his wedding with the use of firearms on Sunday, was identified as Artur Alibekov, 24. His friends told the police that the man was not capable of committing such actions. It all happened because of the relatives, who came to Moscow for the wedding from the Caucasus, the man's friends added.

The police interrogated the shooters and released them. They had to pay the fine of only 100 rubles ($3).

"Artur is a good-mannered man. He works as a common manager, he has recently moved to his wife's apartment. He doesn't have a Ferrar - he rented it for the wedding only. He drives an Opel. He is an absolutely normal guy. Problems may arise for the families of the natives from the Caucasus, who live in Moscow, when their relatives from villages come to visit them in the Russian capital. Usually, they try to see them off home as soon as possible. They simply do not understand that shooting in the air, unlike in their villages, is strictly forbidden in Moscow.