Russian woman kills her husband on vacation in Bulgaria

In the Bulgarian town of Sveti Vlas, a 34-year-old Russian tourist, whose name was not reported, killed her 36-year-old husband during a family fight at night of August 23-24, Life News reports. The woman was arrested. 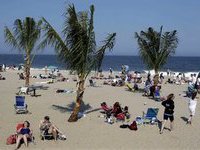 According to police, the couple came to the resort town on July 25. They rented a room in an apartment near the Black Sea coast.

Last Friday, at 5:30 a.m. local time, an anonymous person called the district police and reported finding a man's body on one of the beaches. The body of the Russian man was taken to the hospital for forensic medical examination.

According to investigators, both husband and wife were staying in a state of alcoholic intoxication during the argument. The man was the first to have hit his wife. The woman, in her words, had to defend herself. In a drunken stupor, she beat her husband to death.

This is not the first state of emergency that occurred to Russian tourists in Bulgaria this year. Last week, a resident of St. Petersburg, Olga Volobuyeva, fell into a coma after a stroke that she suffered on the third day of her stay on vacation.

The amount of health insurance was not enough to cover the costs of the patient's transportation to Russia. Volobuyeva's relatives appealed to the administration of St. Petersburg to help transport the woman to the city. As a result, the woman was flown to St. Petersburg on board a special plane of the Russian EMERCOM.