Journalist jumps from 9th floor apartment killing her two sons, self in Belarus

A Belarusian journalist jumped out from the window of her apartment on the ninth floor in Minsk, having taken her two small children with her. 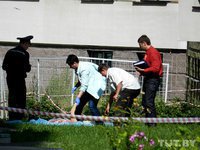 The woman, Milena Anufrienok, was an observer with the Belarusian state-run news agency Belta. Spokespeople for the news agency confirmed the fact and expressed condolences to the relatives of the victims. The 32-year-old woman was on her childcare leave.

The incident occurred on Panchenko Street on August 23. The bodies of Milena Anufrienok and her two sons, aged two and seven, were found near apartment building No. 76. The mother and her children were killed on the spot from injuries received as a result of the fall.

According to BelaPAN news agency, which referred to the head of the information and public relations department of the Investigative Committee of Belarus, Pavel Traulko, a criminal case was filed into the murder of the two children, under part 2 of article 139 of the Criminal Code. For the time being, the basic version of the tragedy is the woman's suicide that led to the death of her two sons and herself.

The woman supposedly committed suicide due to her postpartum depression, Life News tabloid wrote. Milena's neighbors told the publication that journalist had a well-to-do family, although they lived modestly. Shortly before the tragedy, Milena and her elder son Valera went to Ukraine for holidays, while Stas, her younger son of two years, stayed in Minsk. Valera was supposed to start school this fall, Nasha Niva wrote.

Investigating the circumstances of the incident, detectives studied the woman's pages in different social networks. It was revealed that she was studying the materials of seminars about the struggle with phobias and neuroses. The journalist was on her VKontakte page on the day of the tragedy, at 3:36 am.