In the Kursk region of Russia, a flash of lightning killed two people. Another one was injured. 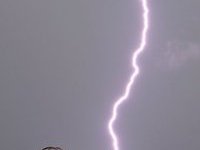 Officials at the regional EMERCOM said that the tragedy occurred in the village of Begosha. It was not raining that day, but flashes of lightning would occasionally flare up the sky. Two men and a teenager were walking along the road when they were hit by lightning, reports Rosbalt. The adults were killed on the spot, whereas the injured 14-year-old teenager was taken to the regional hospital.

The boy has already come to his senses; his health is improving, Life News said. Experts said the three men became victims of a pinpoint lightning strike. "The people died as a result of a tragic combination of circumstances. There were no extremely dangerous factors nearby, which could become a "magnet" for the lightning," officials said.

RIA New Region said that in early August, in the village of Bolshaya Gryaznukha, the Sverdlovsk region of Russia, lightning killed a 35-year old woman, a mother of four. The woman came to the meadow to help her 14-year-old son, who was grazing cattle there. It started raining, and the mother and son decided to take shelter under a tree. The tree was struck by lightning in a few moments. The teen was thrown aside; he lost consciousness. The woman died on the spot.