Tsunami from the sky hits Russia's south. Over 155 killed

As many as 155 people have been killed as a result of the massive flood in Russia's Krasnodar region, also known as Kuban. The death toll continues to grow, but it remains the largest in the town of Krymsk. The number of victims in other disaster-stricken town is much lower: 9 people in Gelendzhik and 2 in Novorossiisk. More than 12,000 people suffered from the disaster. 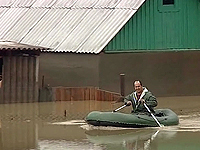 Unbelievably strong rains took place in several districts of the region on Friday and on Saturday night. The level of precipitation was equal to that common for a period of five months… The July monthly average for the area is about 70-100 mm, the annual rate — about 700 mm. Met Office predicts rains until the evening of Monday, July 9, with possible heavy thundershowers, but their intensity may not be as high as in the previous days.

Floods occur frequently in the Kuban, but the disasters of such scale may occur once in 50 years. The last major flood in southern Russia occurred in August 2002 — 62 people were killed.

According to deputy head of Russian Water Respirces, Matvei Tarasov, the flooding could be caused with "narrowed or defunct drainage system which resulted in flood waves on the rivers."

The flood triggered serious disruptions in railroad communication with the south of Russia. Many people, who were traveling to the south for their summer holidays, found themselves trapped in their trains. Nearly 29,000 people are left without electricity in the disaster-stricken area.

A local policeman died when he was trying to rescue people from the water. Lieutenant-Colonel Vyacheslav Gorbunov, born in 1969, was riding a boat, looking for anyone whom he could help. The man saved two little children and then returned to help their relatives, when his boat capsized because of the waves.

It has been reported that the flood may have been caused with the drainage of water from Neberdzhaevsky water reservoir near Krymsk. The rumors of the fast rise of the water level being a consequence of the water drainage from the reservoir appeared immediately. President Putin stated, though, that it was technically impossible to release water from the reservoir. Ivan Sengerov, a senior assistance to the chairman of the Investigative Committee of the Russian Federation, stated that the water was being drained automatically during the rainfall. However, it is too early to say that it could lead to the flood, he added.