The President of the Luge Federation of Russia, Leonid Gart, died in Croatia in an accident. The details and the date of his death are unknown, the BBC Russia reports. 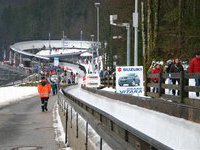 "Yes, an accident happened, but we do not know exactly what happened," Mikhail Potapov, a representative of the Federation said.  "We have become aware of it this morning, at ten o'clock. The Croatian side has not said anything specific. It's a terrible tragedy, he would have turned only 40 years in December," he added.

News agencies suggest that Leonid Gart died as a result of an accident on water, adds the Russian news service.

Russia hosted European luge championships for the first time in the history during his stay in the office; world-known specialists came to work in the national team too.

Last season, the Russian lugers showed the best result in more than 20 years, having won the world championship and three silver medals.

"Managers and employees of the Luge Federation of Russia, athletes, coaches and specialists of Russian luge teams express sincere condolences to his wife, family and friends and to all professionals and amateurs of luge sport," the website of the Federation said.