Six conscripts were killed and four others were inured as a result of the explosion that occurred at Mulino test ground in Russia's Nizhny Novgorod region. The explosion took place on Wednesday night, during the utilization of ammunition. 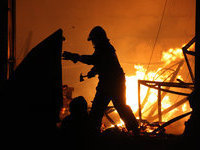 Most likely, the accident occurred due to violations of safety rules. Andrei Bobrun, the chairman of the press service of the Western military district, said that it was a 40-year-old anti-tank missile that exploded at the test ground. The electronic equipment inside the missile was activated when the missile was dropped on the ground.

Five military men were killed on the scene. Another one died on the way to hospital. Three military men, who suffered injuries as a result of the explosion, were flown to Moscow's Burdenko Military Hospital.

All the victims of the explosion were conscripts.