17:57
German PzH 2000 howitzers captured by Russian military in Ukraine
17:46
Russian ice hockey player accused of dodging army service as he wants to sign up NHL
17:13
Czech general tells bad news to Zelensky
17:03
Protests in Uzbekistan: Authorities backpedal as 18 people killed
16:38
Zelensky's adviser says the surrender of Lysichansk is Ukraine's successful operation
16:05
Anonymous insider explains why Russia tolerates shelling of its cities by Ukraine
15:59
Mysl Polska: Ukrainian refugees see Poland as a cash cow
15:52
Kyiv responds to the neutralization of 40 Nazis with a staged video
15:22
The West gets caught in the trap of "Catch-22"

Rescuers continue the operation to retrieve survivors and dead bodies from under the rubble of the apartment building, which partially collapsed in Russia's Astrakhan yesterday. Two more bodies have been recovered this morning, which made the death toll climb to 5. The fate of five other tenants of the apartment block remains unknown. 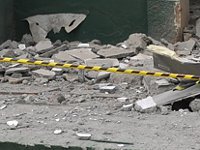 The two bodies were recovered at 8:15 and 8:34. The rescuers have saved 26 people so far. Seven of them have been hospitalized, five others received medical help on the scene.

"All the people, who lost their apartments will have new homes. They will be accommodated in the newly built apartment buildings on Granovsky Street," Markelov said.

On February 27, at about 1:00 p.m. a gas explosion, which occurred in the apartment block, demolished one of six entrance halls in the nine-storeyed block of flats. He explosion supposedly occurred in the shop on the first storey of the building.

Officials representing local law-enforcement agencies said that they would be investigating all versions of the tragedy: a gas explosion, a terrorist act and an attempt to commit suicide by one of the tenants of the building, Arguments and Facts said.