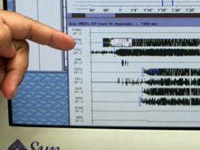 A series of new aftershocks was registered in Tuva Republic (Siberia), where a strong earthquake had taken place before. Another magnitude 5 quake was registered at 8:40 a.m. local time time, Interfax said on Wednesday with reference to Alexander Emanov, the head of the local seismological center. No destruction or casualties have been reported.

According to the minister, the power of the earthquake was measured 9.5 on Richter scale. Bloggers describe their feelings differently. Some people panic, others are horrified, whereas some others are excited to finally experience the much talked-about Apocalypse.

According to Alexander Emanov, the aftershock seismic activity in Siberia will continue for a long time. "It is possible that the consequences of the earthquake will be preserved for years," the scientist said. He said that the aftershocks from the quake, which took place in the Altai Republic in 2003, still occur. According to him, the seismic activity in Tuva is associated with orogenic processes.

The earthquake measured 6.7 occurred on Tuesday at 7:22 p.m. in the Kaa-Khem district of Tuva, at the depth of 10 km. Earlier it was reported that the power of the quake in the epicenter was measured 8-9. The earthquake could be felt in Tuva, Khakassia, the Krasnoyarsk, Irkutsk, Kemerovo and Tomsk regions.

The authorities of the Tuva Republic introduced a state of emergency because of the earthquake. Schools classes in the republic have been canceled.