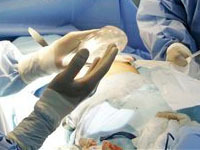 Moscow surgeons have operated the woman, who had been attacked by her own husband. The man stabbed his wife in the heart, but the knife stuck in the woman's silicone breast, which saved her life.

The bizarre story about a new function of silicone breasts - body armor - took place in the family of a 40-year-old female Muscovite. The woman had a fight with her husband, and the man grabbed a knife in a fit of anger, the Moskovsky Komsomolets newspaper wrote with reference to plastic surgeon Sergei Blokhin.

The family fight would have ended with the woman's death if it had not been for her silicone implants.

According to the surgeon, the woman's husband asked his wife to enlarge her breasts five years ago. The woman agreed. The surgeon examined the woman carefully and offered to try size four implants. The client happily accepted the offer.

During the fight, the man stabbed his wife in the left breast. He was apparently trying to kill her since he was targeting the heart. However, the knife did not even reach the thorax because of the large breast implant.

The medics used state-of-the-art implants filled with gel-like silicon. The content of the implant did not leak, and the breast preserved its original shape.

The woman went to the clinic again after the incident and had her implant replaced with a new one.