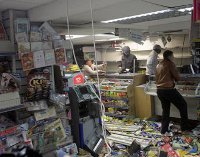 Extra police forces were deployed in London streets to prevent a fourth night of riots in the British capital. London was calm at night, although the unrest spread to the largest city in the north of England - Manchester, Bloomberg said.

As many as 16,000 officers were put on duty overnight by London's Metropolitan Police. A total of 685 people have been arrested in the capital since August 8, when the riots started in Tottenham.

In Manchester, rioters set fire to a property in Salford, west of the center, and Miss Selfridge, a clothing retailer in the main shopping area, Greater Manchester Police said.

Prime Minister David Cameron and senior ministers will hold a second emergency meeting in Whitehall on Wednesday morning with the leadership of Scotland Yard. The ministers will consider the impact of the beefed-up police operation in London overnight, The Guardian said. Cameron flew back to Britain from his holiday in Italy on a special RAF flight. He returned to Britain on Tuesday morning and said that looters and rioters would feel the full force of the law.

In pictures: The pogrom of London

"I have this very clear message to those people who are responsible for this wrongdoing and criminality: you will feel the full force of the law and if you are old enough to commit these crimes you are old enough to face the punishment. And to these people I would say this: you are not only wrecking the lives of others, you're not only wrecking your own communities - you are potentially wrecking your own life too," he said.

Cameron also announced a recall of the Parliament so that MPs could discuss the riots that are spreading across Britain. But although some MPs have been calling for curfews, the involvement of the army and the deployment of water cannon, the prime minister has - at least for now - rejected such hardline proposals, which he did not mention in his statement, The Guardian said.

West Midlands Police is currently investigating reports that shots have been fired at a police officer just outside Birmingham city centre, thought to be in the Aston area, according to Sky.

In Manchester, about 100 yobs have looted shops including Foot Asylum in the Arndale Centre and Liam Gallagher's recently opened fashion boutique in King Street had its windows smashed, The Mail said.