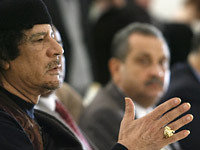 Who is Eman, and why did she appear at the "Rixos" hotel where the journalists were waiting for her? Don't you think that it was just a play, and she played clumsily by the way. But this is only a part of the great lies, because of which there is an undeclared war started in one African country and people die every day. If you believe Eman, then you too are complicit.

This woman is, allegedly, a prostitute. Prostitution is the rare phenomenon in Libya, because the population of the country is socially protected. Girls and women do not need to sell their bodies to feed their families.

The state allocates apartments, cars to all families. All Libyans have an opportunity to eat and dress well, also they receive social benefits. In this "trade" usually in Libya women, immigrants from neighboring countries are involved. Our Eman is a special case. Her story would have remained her private affair. But this woman has made a significant contribution at the incredible amount of lies, fallen on her country. Why?

What prompted her to this act, an attempt to slander her country? Perhaps she feared for her life. So, she agreed, and the organizers of this action imitated the "signs" of sexual abuse. So Eman, her life and conscience become a commodity in the information war against the Libyans.