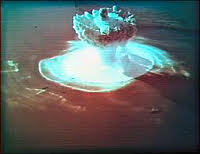 According to eyewitnesses, the blast destroyed the containment of the nuclear power plant unit and blew away its roof. Chief Cabinet Secretary Yukio Edano stated, however, that the explosion did not damage the reactor. The radiation background outside the power plant did not worsen as a result of the blast, Japanese authorities said. Radiation near the No.3 reactor about 40 minutes after the explosion was about one-50th of what considered critical to human health, officials said.

According to Edano, the nature of the explosion at the third reactor was similar to the blast at reactor No. 1, which took place on Saturday, March 12th. The reactor and the containment were not damaged, but the radiation increased to 1015 microsieverts.

All employees of Fukushima-1 have been evacuated. The supply of sea water to the cooling system of the reactor was obstructed on Monday night. The water level dropped considerably, which made the pressure inside the reactor grow. The level of radiation increased to 650 microsieverts per hour. It means that a person, who stays close to the reactor for about two hours, will receive more radiation than during a whole year.

A dose of radiation which develops such symptoms as nausea is 1000 millisieverts per hour, or 1 million microsieverts.

According to experts, the fuel rods of the third reactor are not covered with water completely. Most likely, they say, the rods have already started melting. The situation at the first reactor of the plant is most likely the same.

In the meantime, Japan continues to calculate the number of victims of several earthquakes and tsunami waves. At least 4,500 people have been killed or went missing so far, Kyodo News reports.

The bodies of approximately 2,000 people were found on the coast in Miyagi prefecture. As many as 2,000 bodies were found on Osika Peninsula and in the town of Minamisanriku. The local administration said earlier that more than a half of Minamisanriku residents - about 10,000 people - went missing after the quake and the tsunami wave. The police of Japan have officially confirmed 1,597 deaths; 1,481 people went missing.

As many as 8,000 people went missing in Iwate prefecture, RIA Novosti reports. The fate of 2,500 tourists, who were staying in the disaster-stricken area, remains unknown. The death toll from the earthquake and tsunami may climb up to 10,000 people, Japanese officials said.