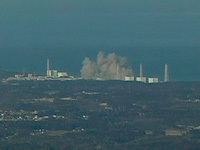 There can be no Chernobyl-like disaster at the nuclear plant in Japan, "since there is no graphite there, so there is nothing to burn there," a Russian academician said.

Academician Yevgeny Velikhov, from Kurchatovsky Institute think tank, said that at Fukushima-1 plant in Japan there were pressurized water-cooled reactors of Japanese production. The academician withheld further comments about the current situation at the Japanese nuclear power plant because there is very little professional information on the subject.

According to most recent information, the breakdown occurred because of the complete loss of electric supplies as a result of the earthquake. The cooling system in the reactor zone went out of order, and the reactor began to heat up.

Yaroslav Shtrombach, first deputy director of Kurchatovsky Institute, stated that it was "a very unpleasant occurrence." "But I think that that it will all be limited to the site of the accident only and there will be no larger catastrophe, if professional measures are taken, of course," the scientist said.

"At Fukushima-1 nuclear power plant, they use BWR reactors - boiling water reactors. We have no such reactors in Russia, so one can compare the current situation in Japan with the Chernobyl disaster only generally," Shtrombach said.

According to the scientist, the current situation at the Japanese nuclear plant looks more like the Three Mile accident in the USA. The partial core meltdown at Three Mile Nuclear Generating Station in Pennsylvania occurred on March 28, 1979. It was the most significant accident in the history of the American commercial nuclear power generating industry, resulting in the release of up to 481 PBq (13 million curies) of radioactive gases, but less than 740 GBq (20 curies) of the particularly dangerous iodine-131.