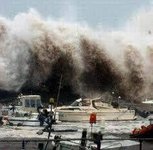 An earthquake at 9:46 PM Pacific Standard Time near the east coast of Honshu, Japan, with preliminary magnitude 8.9 has triggered a potentially large tsunami now propagating across the Pacific Ocean. The Pacific Tsunami Warning Center in Hilo, Hawaii, has issued a tsunami alert for the entire region. At current, tsunami warning is in effect for more than 20 countries.

The quake, possibly the strongest in Japan's modern history, originated some 400 kilometres north of Tokyo, at 24 kilometres depth. The sudden dislocation of the seafloor generated a tsunami which hit north Japan around 30 minutes later. The quake and tsunami have killed at least 18 people in Japan, and caused severe and widespread destruction, Nature.com reports.

Numerous Pacific islands, including some U.S. territories, are also on the list, CNN says.