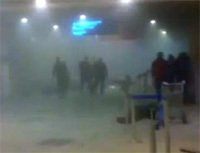 The Moscow police are investigating the explosion at Domodedovo International Airport. Investigators found the head of an Arab male on the site of the accident. It is not ruled out that it was him, who detonated the bomb.

Since the explosion took place in the arrival hall of the international airport, the list of victims includes people of other nationalities. It has been reported that one of the foreigners, who has been injured in the attack, is a Slovak actress, Zuzana Fialova.

The power of the explosion was equivalent to seven kilos of TNT, investigators said. Experts believe that the Domodedovo explosion may become one of the largest transport terrorist acts in the world. The bomb was filled with damaging agents.

Click here to see the video made after the explosion

Most likely, the suicide terrorist was standing in the crowd of people in the arrival area of the airport. Investigators have classified the case as ‘terrorist act,' Vladimir Markin, an official with the Investigation Committee of the Russian Federation said.

Afterwards, the press service of the Federal Customs Service said that the explosion took place in the general admission area, near Asia café, which is situated close to international arrivals area.

The administration of the airport said that there would be no evacuation. The airport will continue working according to schedule.

UPDATE: The number of victims has climbed to 35

UPDATE: Citizens of Slovakia, Italy, France, Britain, Ukraine, Germany, Turkey and Tajikistan are said to be among the victims.