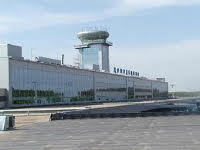 An explosion ripped through the arrival hall of Moscow's Domodedovo Airport. At least 2 have been killed, Russian news agencies say, although the BBC says that ten people have been killed in the blast. An airport employee confirmed the explosion.

The explosion took place in the international terminal of the airport, in the baggage claim area, at 16:40 Moscow time. At least 20 have been injured. The arrival terminal has been closed, RIA Novosti reports.

Eyewitnesses said that rescuers began to evacuate people from the area of the explosion. "One of them was all covered with blood and had his leg bandaged. Another one had blood stains on his shirt," an unidentified eyewitness said.

Domodedovo is the largest airport in Russia in terms of passenger and cargo traffic (22.25 million passengers used the airport in 2010, which is a 19.2% increase over 2009), and is one of the three major Moscow airports along with Sheremetyevo and Vnukovo.

In August 2004, two suicide bombers (who turned out to be two female Chechen militants) were responsible for a serious security breach at the airport which caused two planes (Volga-AviaExpress Flight 1303 and Siberia Airlines Flight 1047) to be destroyed and 90 passengers to die.

The two events were the Russian aircraft bombings of August 2004. Since that time East Line has instigated a new security policy and has spent $20 million on security and detection equipment, which has been installed at the airport. Some of the new security equipment included full body scanners on all checkpoints, making Domodedovo one of the first airports in the world to use this technology