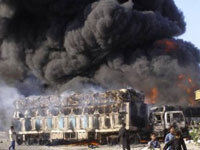 A suicide bomber blew himself up near a mosque in the south-eastern Iranian city of Chabahar, killing at least 36 people and wounding 50 as Shiites marked the climax of Ashura.

A local official, Mahmoud Mozafar, told the ILNA news agency that the blast yesterday took place outside the Imam Hossein mosque in Farmandari Square, among worshippers taking part in a procession.

''An individual walked up to some Red Crescent ambulances and blew himself up,'' he said. He put the death toll at 36, with 50 wounded, according to Sydney Morning Herald.

Immediately after the attack, Ali Abdollahi, Iranian deputy minister of interior for security affairs, lashed out at the United States, telling the official Islamic Republic News Agency that the "equipment" used in the attack indicated that Jundallah had received support from U.S. and regional intelligence agencies.

"One of these blasts has been prevented since we knew about that beforehand, and it caused relatively fewer casualties than the second one," he was quoted as saying, adding that the attacks took place shortly after 10 am.

"One of the terrorists was identified and shot before he could do anything, but he detonated the bomb, which did not cause any casualties," Abdollahi said, Los Angeles Times reports.