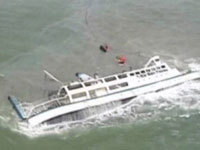 A wooden boat packed with dozens of asylum seekers smashed apart on cliffside rocks in heavy seas off Australia's remote Christmas Island on Wednesday, sending some to their deaths in churning water as horrified islanders watched helplessly from above.

Rescue efforts were underway, and officials said it was not immediately clear how many people were dead, according to Los Angeles Times.

"There are people in the water crying out for help. There's a tragedy unfolding here," said Christmas Island Shire president Gordon Thomson.

The boat is believed to have been carrying up to 70 passengers - many of Iraqi origin - and local media reports say 41 people have been rescued, with another 30 still missing, Sky News reports.