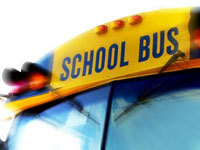 The bomb planted in the congested Bhana Marri residential area on the outskirts of Peshawar went off as the bus from Sir Syed Islamia Model High School was passing by at 3.30 pm.

"The driver was killed and two children were injured. One of the children sustained minor injuries," Special Superintendent of Police Aijaz Khan told the media, according to NDTV.com.

Bomb disposal squad officials said that 'five kg of explosive had been used in the blast'.

'The bus was severely damaged and the windscreen and other structures were badly affected. The school bags and lunch boxes of children, who were taken to hospital, were left in the bus.'

Senior minister of Khyber Pakhtunkhwa province, Bashir Bilour, said that 'the terrorists have now started targeting children which shows that they are desperate'.

'We want to give this message loud and clear that we'll not budge till we flush out the last terrorist from this part of the world,' Sify reports.