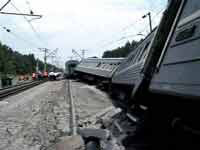 "We fear there are more dead people," Mohammed Akkasuddin, the district's superintendent of police, said in a telephone interview. Police and rescuers workers are still combing the wreckage, he said, according to Bloomberg.

The accident took place around 5pm on Wednesday at the station when Dhaka-bound Chattala Express and Chittagong-bound Mahanagar Godhuli collided head-on due to wrong signal.

The committee has been asked to submit its report in two days, Bangladesh News 24 hours reports.