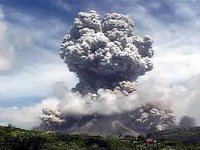 Mount Bromo, one of Java's most popular tourist attractions, came back to life last week after a year-long lull, unleashing a powerful blast of volcanic debris but causing no injuries or serious damage. Volcanologists warned, however, that a bigger eruption may be on the way.

Officials shut down the airport in Malang, a town 15 miles from the volcano, for five days, The Press Association says.

Mount Bromo is one of Indonesia's 129 active volcanoes.

The eruption of Mount Merapi volcano in Central Java, starting on Nov 26, left at least 320 people dead and over 400,000 others displaced. The volcano still poses threat, Bernama reports.