Thirty missing after explosion in New Zealand coal mine 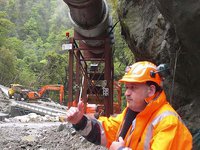 Around 30 workers were unaccounted for after an explosion ripped through a coal mine in New Zealand today. Emergency services were racing to the Pike River Coal Processing Plant near the town of Atarau on the west coast after police received reports of an explosion.

Local Mayor Tony Kokshoorn said that around 30 people at the mine were unaccounted for.

"It's not good news at all," he said. "We don't know at what depth the explosion is but there's certainly a big explosion. With a bit of luck, things might be OK. But there's 25 to 30 miners unaccounted for.", Scotsman reports.

A special rescue team, known as the West Coast Mine Rescue Team, has assembled at the mine "to assess what the requirements might be to go into the mine and effect a rescue," New Zealand Energy and Resources Minister Gerry Brownlee said.

"So at this stage we're trying to stay out of their way. They are the experts," he said.

The mine entrance runs a little less than a mile and half before branching off into sub areas, police said. It has two emergency exits, but it's unclear if the miners can reach either, ABC News says.